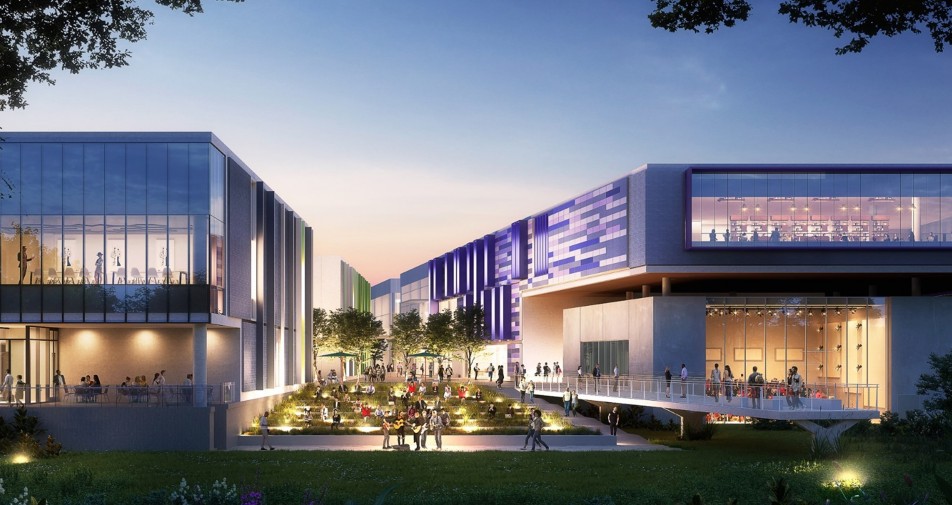 This is the first in a series of articles about specific aspects of TCC Northwest’s redevelopment project, part of the $825 million bond program approved by Tarrant County voters in 2019. Other articles will follow periodically as construction moves toward completion in late 2025.

Pate’s hardly alone in his enthusiasm. Everyone – students, faculty, staff – are excited about what is now beginning to take shape as part of TCC Northwest’s redevelopment program made possible by the successful bond election. Those who have seen the plans, Fraire said, ask, “Are you sure this is our school?” Students, even seniors, ask if it will be open before they graduate next May. Some ask if it will be OK for them to return after graduation.

No, the school won’t occupy the new building until 2025, but Fraire would like nothing better than to have alumni return so they can tell students what advice they would give their old selves if given the chance. “I want them to come back and know, forever know,” he said, “that this new building is their building.”

When he came on board in 2017, he was fairly certain the school building was destined for replacement. He attended facilities meetings at which agendas included an item, “Empty CHS Building,” a good indication that a new one was on the way. Still, he was cautiously optimistic until it formally became part of the bond program.

Now, however, it’s not just on paper, but the steel framework is visible from the current location. When he hosts prospective students and their parents, he casually suggests, “Let’s cross the parking lot and see how our new building is coming along.”

Fraire was not a party to discussions with architects about the layout of the school, which will occupy a bit more than half of Building 1, one of two now under construction. That, he said, was more of a collaboration involving Fort Worth ISD and TCC Northwest officials, namely President Zarina Blankenbaker and Vice President for Academic Affairs Judith Gallagher.

No, he wasn’t in on those talks, Gallagher said, “but we certainly knew what his most pressing needs were.” Not surprising since, according to Fraire, he and his six predecessors as principal have all had the same items topping their wish lists. Top priority was new science labs. “I have three science teachers, and we need three labs,” Fraire said. “The science department at TCC Northwest has been so gracious in allowing us to use their facilities, but now we’ll have our own labs and be set up when the students come in and not have to worry about hurrying because a TCC class is due to come in next.”

Second on the list was more space. There will be enough classrooms for every teacher to have his or her own without having to share with a colleague, and all classes will be in the main building instead of requiring nine portables. But another compelling need was for large spaces. The current cafeteria holds fewer than 100 students for the enrollment of nearly 400. When Marine Creek awarded its first four University Interscholastic League academic letter jackets, there was no way to have an all-school assembly.  Now, there will be what Fraire calls a “cafetorium,” a larger cafeteria with a multipurpose room opening into it.

Plus, there are other areas for students, such as flex rooms used for various purposes. “We’ll have more areas that they (students) are going to be able to access,” Fraire said. “That’s going to be a big hit. It’s going to be like ‘Wow, we can come in here to study.’ And they’ll be areas for our student clubs that now have to meet outside because there’s no space large enough.”

The building location – just west of the Health and Physical Education Buildings — means that students taking both college and high school classes won’t have as far to walk. “That’s a good thing,” Fraire said, “because they’ll have a little more time to visit with friends and also, perhaps, more time to adjust their mindset as they leave the high school and enter the college buildings.”

Altogether, Fraire said, the new facility will be exactly what was needed. “We can transition from where we’re at, with all these modulars, into a new one-building, multipurpose, multigrade, multilevel home.”

When he says multilevel, he’s talking not only about improvement in functionality, flexibility, aesthetics and such, but also in a strictly physical sense. The building will be three levels as compared to the present single-level structure. On ground level will be the cafeteria and multipurpose room, two flex classrooms and spaces for Fraire, his vice principal and an administrative assistant. The second level will feature those new science labs, five classrooms, a “student success” room, and facilities for teachers including a break room whimsically titled “rejuvenation” on the plans. On top are offices for administrative functions such as attendance and wellness plus five more classrooms. The three levels are connected, of course, by stairs and elevators, but also by an atrium that that will furnish a more abstract, illusory link.

Another big plus is that the school won’t outgrow the building. As an early college high school, Marine Creek can accept only 100 new students per year.  “This will keep this school, this partnership with TCC Northwest going for years to come, even after I’m long gone, Fraire said. “The reason we’re successful is because of that partnership, and this new building just happens to be the icing on the cake, the cherry on top of the soda.”