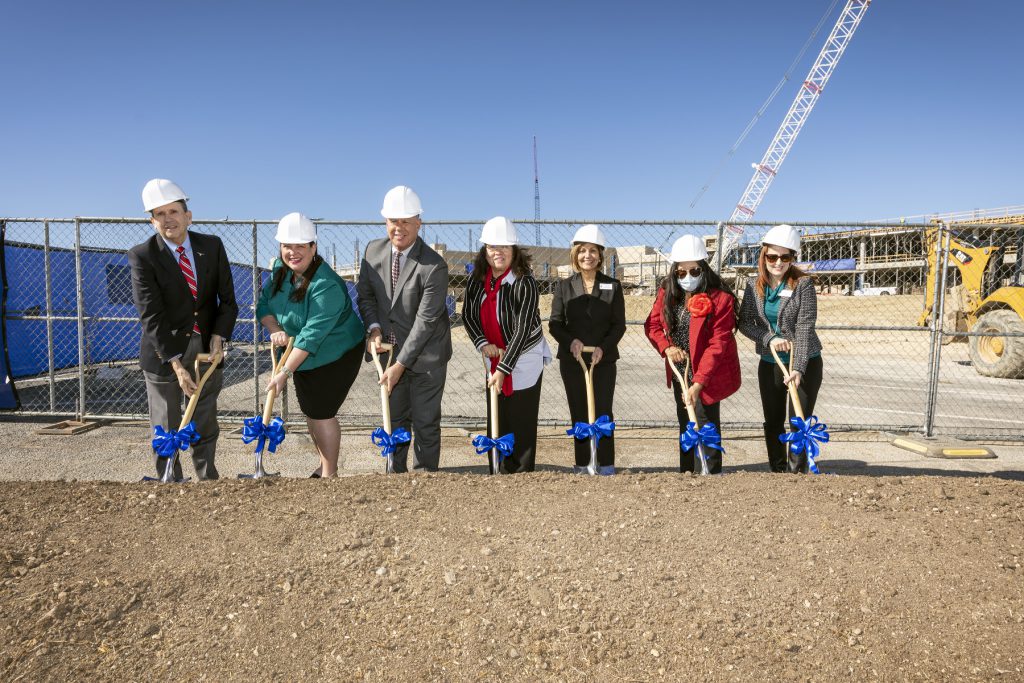 It is unusual to have a groundbreaking ceremony for a project that not only has already broken ground but has two new buildings well underway. But then, not much was usual in COVID-plagued 2020 when the TCC Northwest redevelopment project began.

So, it was that when the ceremonial shoveling took place on Nov. 12, the past and future stood together, new buildings and old, as emblematic of what has been and what will be.

“Building Futures” was the day’s theme, but the past and present TCC Northwest got plenty of attention. President Zarina Blankenbaker gave highlights of the campus history from its original groundbreaking in 1974 to the current array of facilities and programs. She also noted the strong wind that had seen two huge construction vehicles pressed into service to hold down the rented tent.

Chancellor Eugene Giovannini prefaced his remarks on the importance of TCC Northwest to the College and community by reminding Blankenbaker not to speak too ill of the wind. After all, he said, it was the damage from a violent windstorm in 2016 that led to the scope of the redevelopment. “The result was that the Northwest Campus cornered the market on scaffolding for four years,” he said.

Then, after highlighting the Three Goals, Eight Principles initiative, he closed by saying, “As we turn our shovels this afternoon, let’s be reminded that students and our community are at the center of our service.   Education is our community’s most important public treasure, and as stewards of that gift, we are grateful to the citizens and family members who recognize our value and enroll here generation after generation.”

He noted that education is our community’s most important public treasure and said, “As stewards of that gift, we are grateful to the citizens and family members who recognize our value and enroll here generation after generation.”

The final two speakers bridged those generations of students who have attended TCC Northwest. Teresa Ayala, president of TCC’s Board of Trustees, recollected her days as a student in the 1980s. “The campus was different when I attended,” she said, “yet I knew I belonged here, and I found that success was, indeed, within reach. The students have evolved, but they still aspire to succeed, and we are committed to helping students achieve the dreams they envision.”

One of those students, Keeley McFadden, also shared her personal dream of becoming an ultrasound technician. “As I come to campus each day, I can’t help but notice the construction and how fast the buildings are going up, transforming before our eyes,” she said. “Just like these buildings, many futures are being built here, brick by brick. Just as these buildings will be here for many years, I am developing skills that will be with me for a lifetime.”

The day was a showcase for many of her classmates. The Northwest Jazz Band performed before the ceremony, dancers entertained afterward, art students were busy on a large abstract and student Ambassadors acted as guides and docents. They, like McFadden, have their own their dreams. So, it was appropriate that vocalist Jesse Martinez and accompanist Lauren Koszyk performed, “A Dream is a Wish Your Heart Makes,” from the 1950 Disney film, “Cinderella.”  It served as a reminder that Tarrant County College is a place dreams come true, furnishing Cinderella stories for decades past, present and future.